Home » Computer » You are reading »

With the smartphone revolution and people riding on the back of the internet storm, there is hardly any scope for being secure from the virus attacks. The risk of losing the saved files has elevated than ever before. In such a scenario, it becomes a very important task to secure the files that are deemed important for you. People sometimes become complacent about this subject and end up losing the files that mean a lot to them. Several softwares have entered the market on looking the urge for backup softwares in the industry. However, most of them are either expensive to own or do not ooze excellence. EaseUS Todo Backup is the software that has scored well with the users and more importantly it is completely free of cost.

This software contains three sections on board. The first section is responsible for backing up the files available in the PC and smartphones. The other section dedicates itself towards recovering of important files that have been temporarily lost. The whole concern of the second section is the recovery of files. The third section, which is known as Clone enables the user to transfer the files from HDD to SSD. Its very important considering the reports about the damage of HDD in the recent past. The third section also contains some tools that provide exceptional services to the user in accordance with the backup.

It is extremely easy to use this software. This is the reason why it appeals to all the sections of users, being it a professional worker or a student. The interface is so interactive that you would hardly find any problems in accomplishing your tasks. However, it is smarter to check tutorials before putting this free backup software to use.

EaseUS Todo Software is considered the boss of backup softwares, considering the response it has received from users all around the globe. Considering the legacy of EaseUS Todo, there is simply no ghost alternative to this software.

The critics and the experts have all hailed the working of this software. The developers are spreading awareness among the potential customers by launching the promotional campaigns which is very important in order to aware people about the importance of backup of files. The easy interface makes it more reachable to a wider audience. We can undoubtedly claim that it is one of the best backup softwares that the market has rolled out in the current times. 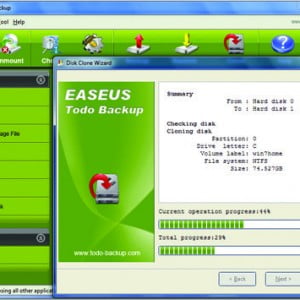