The Spytector helps the Supervision and Surveillance of your Computer

The Spytector helps the Supervision and Surveillance of your Computer

The surveillance of the computer is very vital and at the same time, it is not as easy as such. However, with software like Spytector, you can be sure of your documents being safe on your computer.

This is a keylogger, or rather, a keystroke logger, which helps in the supervision and the surveillance of your computer. It is invisible and overly unnoticeable and you can use it to supervise the usage of your computer.

This program will run undetected and also, it will not be noticed by an antivirus program. When the antivirus scans your computer, it will not be detected by any. Here is where the keylogger applies. There is the pro version and the trial version. There are some AV programs that tend to be powerful and able to detect a number of legit keyloggers. For that reason, if you are using the trial version, you will be detected by the AV programs. Nevertheless, the detectable issue will not be present in the complete version. The complete version cannot be detected by any antivirus program. 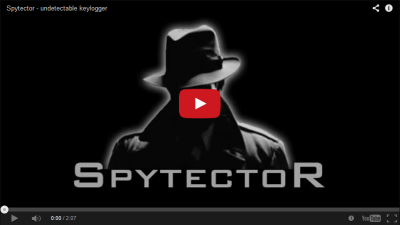 The monitoring activity will be stored in an encrypted log file that secured, so there will be no any possibility of detection. The software is completely covert on the desktop of the user and it cannot be viewed in the Task Manager. So basically, it is a stealth Spytector Keylogger that assures you of total privacy. This version will be supported on Windows 2000, XP and Vista, Windows 7, and Windows 8. The program has a feature that helps you to restore the password that has been stored in the latest version of Chrome, Safari, Google Talk, Opera, Firefox, among others. It also has a number of improvements on their features.

Features of The Keylogger

The Security And Main App Features

In general, the spytector helps to keep your computer safe from intruders and in general, it will assure you of privacy. For that, there wouldn’t be any program trying to look over your system.

I am Poppy Arch chief executive officer at Tecmetic. I target Latest Trends in Technology. i'm conjointly writing for Apple and TechCrunch. I even have 6 year expertise of technical writing. Tecmetic is totally absolve to readers. Our financial gain is totally a resultant of the e-mail and web-advertising. but, we have a tendency to aren't engaged in sale of any product or ideas on-line. we try for honest news coverage, significantly from technology sector.
« Vibosoft iPad/iPhone/iPod to Computer Transfer
Pick up customised couple mugs for your love to pamper and make them feel special »